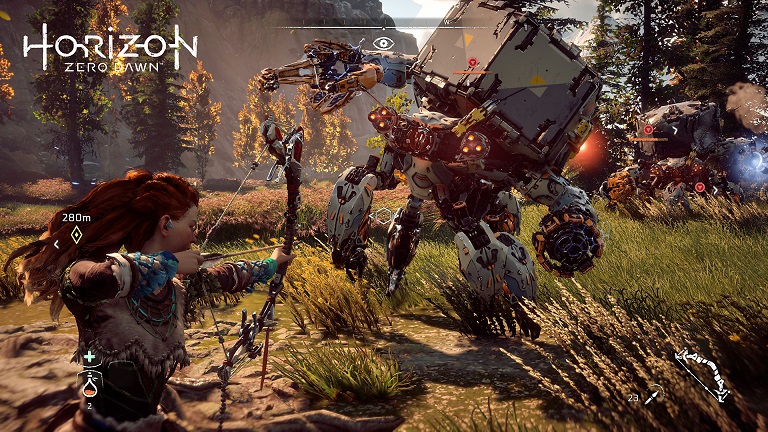 Horizon Zero Dawn is one of latest games released by Guerilla Games exclusively for PS4 set in a future world where the land has been overrun by robotic animals called by people as ‘machines’. These machines take the form of various existing and extinct animals which include deer, rhinos, big cats, birds and even dinosaurs. Other than those machines all past technology has been lost and the people are mainly living in a nomadic world augmented with machinery taken from fallen machines.

Setting of the World

In this world, you take control of Alloy, an outcast from the Nora tribe who tries to understand her purpose and her origin. In this quest, you will not only discover her past but also understand how the world has reached its current state and why these machines roam the world.

To do this, you will need to complete various quests each with their own set of tasks which will take you on an adventure through the world. At this point, many players are overwhelmed by the number of things they can do within the game and have problems in progressing forward.

This article will help you by providing Horizon Zero Dawn walkthrough, basic guidelines through which you can not only enjoy the game but also experience the rich story the world hides.

First of all, you can play all of the main quests of the game without having to do any side-quests. This means that you will not have any problem in case you only want to do main quests and are afraid that you might lose any game, which would be useful later on.

The game also includes various side-quests which provide many benefits to the players. One of these benefits is the ability to override the mechanics of machines and control them. While this ability becomes available as you play the main quests only a select few of those smaller machines can be overridden. For bigger ones, you need to complete certain side quests known as Cauldrons which will then unlock a new machine to control. In order to have a large variety of machines at your disposal, completing Cauldrons could be considered one of the secondary objectives of the game.

For new players, it is advised to carefully understand the mechanics of each different machine. Each of them moves differently and have a set pattern of attacks which they follow to attack their enemies. Always, use this knowledge to dodge their attacks and show them who is the boss.

Moreover, in order to reveal more areas on the world map, you need to override Tallneck machines which are found throughout the world. Unlike other machines, they are totally harmless and can be considered an obstacle course. They are over 2 meters tall and require you to climb to their top to access their data. Once done the whole area of the map is relayed through the Tallneck’s system allowing you to discover new areas on your world map.